HomehealthParty Drugs – They Are So 1990’s 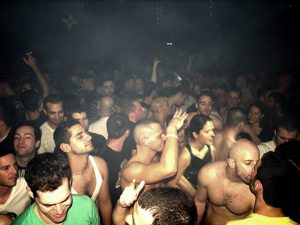 If you came of age in the 90’s, you may very well have a mixed-assortment of memories of the club scene in those years. Raves, glow sticks body paint, pacifiers . . . lots of dancing . . . and, in some cases, some pretty wild nights of amazing sex.

While drugs have been a part of the nightlife for a long time, the 90’s was to X what the 70’s was to coke. The 90’s may have seemed a bit lackluster at first, compared to the bubble-gum floofiness of the 80’s, but looking back, they were a pretty fun time. 9/11 hadn’t happened yet, and we were able to live our lives offline, without being photographed 60 times a day.

The 90’s were also kinda dangerous.

Increases in pot smoking coincided with the explosion of the rave culture, which started out in the UK and spread to the states. Heroin was also on the rise in the 90’s, so much that the term ‘heroin chic’ became a thing. Meth also became more common, with homemade labs popping up all over the country. And, for the first time ever, being bi or gay was becoming—at least to some degree—acceptable. We still have a long way to go, but in comparison to the 1890’s, well, we had it a lot better.

It’s not that party drugs were brand new in the 90’s. After all, disco and coke paired up long before house music and ecstasy.

Everything. And nothing. Every weekend people still pack nightclubs and spend hours dancing, drinking, and partying. Every Saturday and Sunday morning, people sort through a fresh assortment of carefree, perhaps hedonistic moments and memories. Some will smile, some will cringe, and some will shrug and prepare to gleefully start all over again.

Only now, many people are also facing the gut-churning possibility that their exploits have been filmed or photographed, and will be posted on the internet. Privacy has always been paramount to the gay community, especially to those who haven’t fully come out yet. While there are definitely people who have joyfully tossed aside the shackles of pretending to be straight, many people are still living double lives, and can face some very serious problems should a risqué photo pop up on social media.

But even as one generation outgrows their wild years, a new crew is pushing in the club doors behind them, rolling the dice with party drugs and PnP.

PnP – or party n’ play—is, in technical terms, the process of taking drugs to make get laid a bit more exciting. In layman’s terms, it’s when you get blizted and fuck a bunch of people.

Gay people love sex. I know, we don’t have a lock on this: lots of people love sex. But many people in the LGBT community really, really love sex. And while PNP may be sexually satisfying, it also has its risks. Studies show increased chances of contracting STDs, or of being assaulted or robbed.

We all want wild stories to tell. We all want to live our lives to the fullest, and soak up every moment. Dancing and drinking and meeting new people are fun, and have been part of society since, well, pretty much forever.

But is it worth risking your health—and possibly even your life—for?

Sorry Tina and Molly. I think it’s time we move on without you.

View all posts by David